Dominion Lending Centres - The Tracy Valko Team
4.9
Based on 345 reviews

Fixed or variable? Revisiting the debate amid low rates 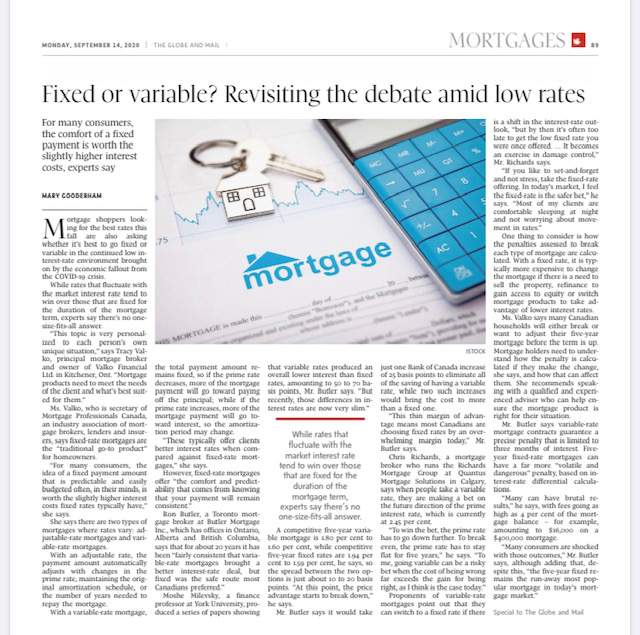 Courtesy of The Globe and Mail (Print Edition)

For many consumers, the comfort of a fixed payment is worth the slightly higher interest costs, experts say

Mortgage shoppers looking for the best rates this fall are also asking whether it’s best to go fixed or variable in the continued low interest-rate environment brought on by the economic fallout from the COVID-19 crisis.

While rates that fluctuate with the market interest rate tend to win over those that are fixed for the duration of the mortgage term, experts say there’s no onesize-fits-all answer.

“This topic is very personalized to each person’s own unique situation,” says Tracy Valko, principal mortgage broker and owner of Valko Financial Ltd. in Kitchener, Ont. “Mortgage products need to meet the needs of the client and what’s best suitedfor them.”

Ms. Valko, who is secretary of Mortgage Professionals Canada, an industry association of mortgage brokers, lenders and insurers, says fixed-rate mortgages are the “traditional go-to product” for homeowners.

“For many consumers, the idea of a fixed payment amount that is predictable and easily budgeted often, in their minds, is worth the slightly higher interest costs fixed rates typically have,” she says.

With an adjustable rate, the payment amount automatically adjusts with changes in the prime rate, maintaining the original amortization schedule, or the number of years needed to repay the mortgage.

However, fixed-rate mortgages offer “the comfort and predictability that comes from knowing that your payment will remain consistent.”

Ron Butler, a Toronto mortgage broker at Butler Mortgage Inc., which has offices in Ontario, Alberta and British Columbia, says that for about 20 years it has been “fairly consistent that variable-rate mortgages brought a better interest-rate deal, but fixed was the safe route most Canadians preferred.”

Mr. Butler says it would take just one Bank of Canada increase of 25 basis points to eliminate all of the saving of having a variable rate, while two such increases would bring the cost to more than a fixed one.

“This thin margin of advantage means most Canadians are choosing fixed rates by an overwhelming margin today,” Mr. Butler says.

Chris Richards, a mortgage broker who runs the Richards Mortgage Group at Quantus Mortgage Solutions in Calgary, says when people take a variable rate, they are making a bet on the future direction of the prime interest rate, which is currently at 2.45 per cent.

Proponents of variable-rate mortgages point out that they can switch to a fixed rate if there is a shift in the interest-rate outlook, “but by then it’s often too late to get the low fixed rate you were once offered. … It becomes an exercise in damage control,” Mr. Richards says.

“If you like to set-and-forget and not stress, take the fixed-rate offering. In today’s market, I feel the fixed-rate is the safer bet,” he says. “Most of my clients are comfortable sleeping at night and not worrying about movement in rates.”

One thing to consider is how the penalties assessed to break each type of mortgage are calculated. With a fixed rate, it is typically more expensive to change the mortgage if there is a need to sell the property, refinance to gain access to equity or switch mortgage products to take advantage of lower interest rates.

Ms. Valko says many Canadian households will either break or want to adjust their five-year mortgage before the term is up. Mortgage holders need to understand how the penalty is calculated if they make the change, she says, and how that can affect them. She recommends speaking with a qualified and experienced adviser who can help ensure the mortgage product is right for their situation.

Mr. Butler says variable-rate mortgage contracts guarantee a precise penalty that is limited to three months of interest. Fiveyear fixed-rate mortgages can have a far more “volatile and dangerous” penalty, based on interest-rate differential calculations.

“Many consumers are shocked with those outcomes,” Mr. Butler says, although adding that, despite this, “the five-year fixed remains the run-away most popular mortgage in today’s mortgage market.”

While rates that fluctuate with the market interest rate tend to win over those that are fixed for the duration of the mortgage term, experts say there’s no one-size-fits-all answer.