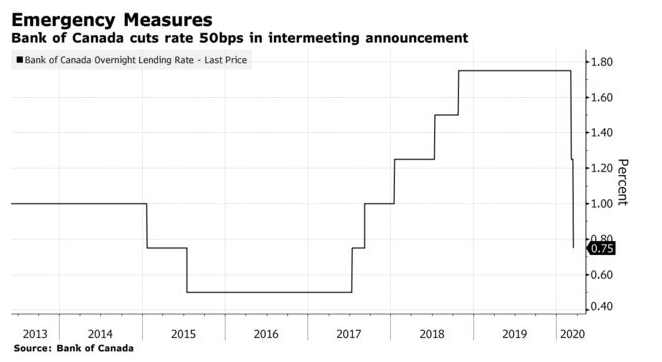 Prime Minister Justin Trudeau said Canada would introduce a “significant” fiscal stimulus package, as part of a coordinated effort with other Group of Seven countries to counter the virus-driven global economic slowdown and calm markets. In an exceptional press conference held at 2 pm today, Finance Minister Morneau sat at the side of the Governor of the Bank of Canada, and the head of the Office of the Superintendent of Financial Institutions (OSFI) to announce measures to soothe financial markets, boost confidence and support the Canadian economy.

He also commented: “Combined with the other measures announced today, lower interest rates will help to support confidence in businesses and households. For example, borrowing costs will be lowered both for new purchases of homes and through variable-rate mortgages and mortgage renewals.”

Today, the Bank also announced a new Bankers’ Acceptance Purchase Facility. This facility will support a key funding market for small- and medium-sized businesses at a time when they may have increased funding needs, and credit conditions are tightening. The facility will buy 1-month BAs starting the week of March 23. More details are forthcoming. This comes in addition to introducing a 6-month and 12-month bi-weekly repo operation yesterday.

Finance Minister Morneau announced he would deliver a fiscal stimulus package next week that will include an additional $10 billion in new funding to the country’s two business financing agencies — the Business Development Bank of Canada and Export Development Canada. This announcement follows $1 billion of funding for the country’s public health response outlined earlier this week, which came with some modest measures to support disrupted workers.

So significant fiscal stimulus measures are coming next week. There were no details on the size of these measures, but something on the order of 1% of GDP seems like a reasonable estimate. Mr. Morneau also noted that the government is looking at providing direct aid to individuals and families. The floodgates are about to be flung open.

The final bit of stimulus came from OSFI’s lowering capital requirements for the Big Six Canadian banks. Jeremy Rudin, head of Canada’s banking regulator, announced he would reduce the nation’s “domestic stability buffer” by 1.25 percentage points of risk-weighted assets, effective immediately. The buffer will drop to 1%, from its prior level of 2.25%. He said that the government is looking at providing direct aid to individuals and families. This action will free up about $300 bln in funds for the big banks to lend. It will also offer some solace to the stock market, where bank stock prices have plunged in the past two weeks. Concern about the Canadian banks’ balance sheets is always rife when markets are stressed.

In another move, the government announced that it is suspending consultation on the proposed change to the uninsured mortgage stress test. The insured stress test revision will start on April 6 as planned. OSFI wants to wait until markets return to more normal activity before making a final decision on the insured qualifying rate. Hopefully, banks will cut their posted mortgage rates in response to the combined 100 bp decline in the overnight rate and the plunge in 5-year bond government yields (see chart below). As of yesterday, March 12, the BoC Daily Digest held the conventional mortgage rate (5-year, aka the posted rate) steady at 5.19%.

We will now watch what the Canadian banks do in response to these actions. Will they cut their prime rates another full 50 basis points? And will they pass that on to borrowers of variable-rate mortgage money? Monday will be an interesting day.

Bottom Line: This is an excellent start to getting ahead of what will likely be a very challenging period for the Canadian economy. However, we need to see more of the details. Look for additional fiscal stimulus to be announced in the coming days and weeks (from the federal government as well as the provinces), and expect the Bank of Canada to ease policy rates another 50 bps to a level of 0.25% for the overnight benchmark rate by April. And, if conditions deteriorate more than anticipated, there’s room for the BoC, government and OSFI to do more.

This is in direct contrast to the inept and disjointed policy response south of the border. Hopefully, the financial markets will take note that Canada is far better equipped both financially as well as from a public health perspective than our recent stock market performance has suggested.